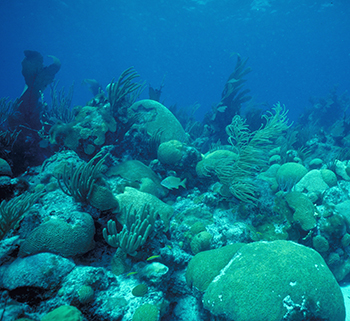 The main habitat of the Brain Corals is the outer reefs of Bermuda. They can be readily seen from the surface on the rim reefs which are the shallow outer reefs just before the water starts to deepen. Some Brain Corals are also found on the small reef formations in North Lagoon and a few occur in inland marine areas such as Castle Harbour. Brain Corals can also be seen off the south shore on the platform reefs beyond the sandy areas.

There are two closely related Brain Corals in Bermuda and the differences between them are small. The Brain Corals are easily recognised by their large size and domed shape. These corals are shaped like a hemisphere that can be up to 3 feet across. Often the hemisphere is somewhat flattened. The surface of Brain Corals always has prominent ridges, a feature that makes them resemble brains. The colour of Brain Corals (see over and right) is a yellowish-brown often with a definite greenish tint. Brain corals are important in the building of the reefs. When dead they turn whitish but remain very hard and other corals settle and grow on them, adding to the reef structure. As with all other reef-building corals, the Brain Corals are really a partnership, called symbiosis, between the coral itself and small marine plants or algae. These tiny plants grow within the coral making food from sunlight. Much of this food is made available to the coral to aid in its growth. Without this partnership, coral reefs would not be the amazingly lush and diverse places that they are.

There are several other corals in Bermuda which make small domes, but none of them are anything like as big as the Brain Corals. Star Corals may grow as a sheet over old, dead brain corals, but if they do they always have a smooth rather than a ridged surface.

Bermuda has some of the most northerly coral reefs in the world and Brain Corals are among their most common coral species. Without them the massive, hard reefs would not form. Coral reefs are very resistant to heavy wave action and since they grow up close to the surface, they make a very efficient wave barrier. Without them, the east, north and west coasts of Bermuda would be subject to a very heavy pounding by waves and this would cause very harmful erosion. Another important conservation aspect to the coral reefs is that they form a very productive and varied ecosystem, which supports many hundred different kinds of fish and invertebrate animals. Many of these reef animals such as Spiny Lobsters and fishes such as Groupers are the basis of food fisheries. We have to remember that this whole reef system must be kept in balance. We know that over-fishing of reef fish, for example, can result in the death of reef corals. Proper management of reefs is critical for their existence. All of Bermuda’s corals are protected.