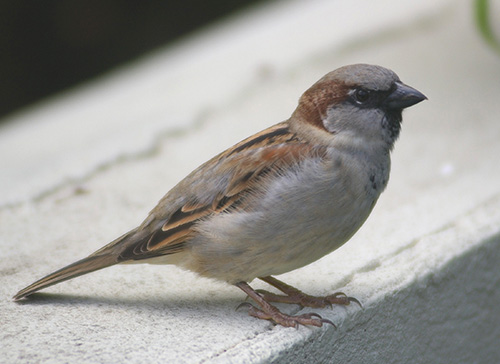 The House Sparrow, an introduction from Europe has spread over the whole island since its release. Although it is common island-wide, it is most abundant in urban areas, and can always be spotted on city, town and village streets and in urban parks. Sparrows quickly assemble if crumbs or other food is thrown on the ground. They can be quite tame, even venturing onto outdoor tables to steal food. They roost in trees and build large nests often under the eaves of buildings. They are a particular threat to Bluebirds.

Characteristics:
The house sparrow is one of the group of ‘small brown birds’. Both males and females are a dark brown on the back with lighter borders of larger feathers making them appear streaked (over). The belly is a slightly greyish white. The male has a prominent black ring around the bill, extending back to the eye (right). The song is an unmelodious chirping. They grow to about 7 inches or 18cm long, and eat almost anything that they can find.

Similar Birds:
Although the House Sparrow is technically a finch, the birds which it most resembles are the true sparrows, and this is the reason it was called a sparrow. However, in urban habitats the true sparrows are rare. They can be distinguished by the absence of the black head markings typical of a male house sparrow. Additionally, the true sparrows have pleasant songs; they also are migratory rather than resident.

House Sparrows were introduced to Bermuda twice in 1870 and 1874. These introductions were made in the mistaken belief that the House Sparrows would control flies in the towns and city; instead they just became a general pest.

One of the main conservation concerns in regard to the House Sparrow is that it successfully competes with bluebirds for their nesting sites. This competition has been so extreme that Bluebirds would surely have died out if a Bluebird nest box scheme not been put in place by the Audubon Society. Sparrows can also be a nuisance on city streets and around dairy farms and make a mess at their nesting sites.