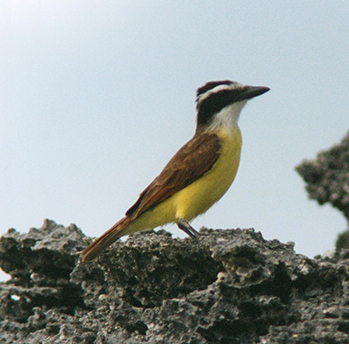 The Great Kiskadee was introduced to Bermuda from Trinidad in 1957 to control Anolis lizards. The Jamaican Anole had been brought to Bermuda in 1905 to control fruit flies that were damaging local crops.  Kiskadees were known to eat lizards in their native range, so 200 individuals were brought to Bermuda (Bennett & Hughes, 1959).

This biological control failed because once in Bermuda the Kiskadees ate few lizards. Instead they prefer the eggs and chicks of smaller birds, like our endemic White-eyed Vireo and native Bluebird. They also eat fruits and berries and are responsible for spreading the seeds of invasive plants. Kiskadees eat small fish and can be seen around the shoreline fishing for fry or in ponds eating the fish which were placed there to control mosquitoes. They also eat a variety of insects and can be seen acrobatically plucking flying insects from the air. The introduction of the Kiskadee is thought to be responsible for the probable extinction of the Bermuda Cicada.

Because they eat such a variety of foods, Kiskadees compete with native and endemic birds and other species for food. They can also be aggressive towards other birds, and have been observed mobbing much larger birds, such as crows and raptors.

The Kiskadee is one of the larger land birds in Bermuda, and can reach up to 25 cm (10 inches). It is distinctively coloured with a bright yellow belly and a reddish brown back.  The head is white with a black cap and black band through the eye. The Kiskadee has a distinctive call which is quite loud and sounds much like ‘kis-ka-dee’.

The Kiskadee nests in the spring and summer in trees and on utility poles. The nests are dome shaped with a large opening on one side. They lay 2 to 4 eggs which are tan with brown patches.