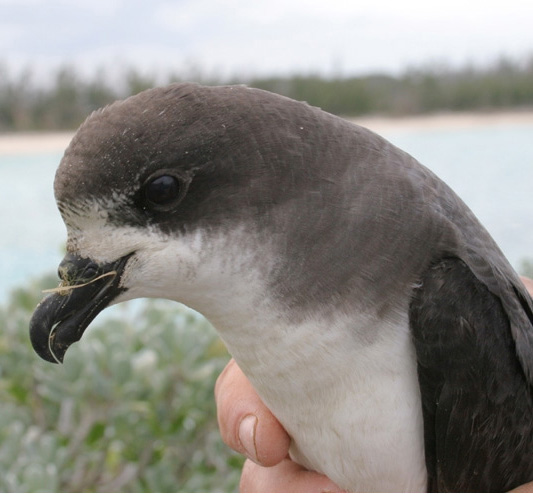 Cahows are oceanic birds, which means that they spend their lives over the open ocean coming ashore only to breed. Their breeding habitat at present is four small islands in the east end of Bermuda within in the Castle Islands Nature Reserve. On these islands where nesting sites are carefully protected, Cahows nest in artificial burrows dug into the ground. Before colonisation, when these birds were abundant they nested in the forest, probably in cavities created under the roots of blown-down trees. When at sea, these birds spend most of their time flying just above the waves, so that they can skim up their food of small squid and other creatures, from the surface of the water.

Bermuda Petrels or Cahows are relatively small birds reaching only 15 inches or 38 centimetres long. Both sexes look alike. The top of the head and body are of a dark-grey colour and the tail and wings are almost black. There is a pale patch on the back just ahead of the tail. The under- parts of the bird are very pale grey, almost white, this colour extending on to the chin and just above the beak. The beak is black and hooked, with tubular nostrils. Juvenile Cahows spend about 4-5 years at sea before they come ashore to breed starting in October or November. Their return to land is always under the cover of darkness so that these birds are rarely seen. The first eggs are laid in January, one only per female, and incubated by the female parent for 51-53 days. The young Cahows (right) are fed in the burrow by the female for about 12 weeks, after which the female parent leaves. The food is collected in the Gulf Stream well to the west of Bermuda. It is carried back in the crop and regurgitated to the chick. The young Cahows practice flying, but staying on the ground, for a few days and then leave for the open ocean.

The chances of ever seeing a Cahow are so small that a comparison with other birds is almost never made. Other oceanic petrels which resemble Cahows are the Black-capped Petrel (Pterodroma hasitata) which differs in that it has a white collar, and the Audubon’s Shearwater (Puffinus lherminieri) which is somewhat smaller and has a black patch on the back before the tail.
Conservation Importance:

The Cahow is Bermuda’s national bird and is considered one of the most important living things in Bermuda. Before colonisation they were abundant everywhere during the breeding season and so tame that they could easily be gathered up for food, which nearly lead to their demise. They rapidly declined in numbers and for 300 years this bird was considered extinct. However, in 1951 seven pairs of breeding birds were discovered by Robert Cushman Murphy and Louis Mowbray. The recovery of the population to 76 pairs in 2006 has been slow, and the success of this endeavour can be credited to Dr. David Wingate and Jeremy Madeiros. Dr. Wingate devoted much of his working life as Bermuda’s Conservation Officer to the recovery of the Cahow population. One major break-though was the creation of artificial nesting burrows, which were later modified by the inclusion of a wooden baffle to keep out Longtails also called White-tailed Tropic Birds. Problems have resulted from hurricanes damaging burrows, predation from invasive species (especially rats), and lack of suitable nesting habitat. The stewardship of the Cahows is now under the devoted leadership of Jeremy Madeiros, Bermuda’s new Conservation Officer. The Cahow is Bermuda’s best known endemic species and the recovery of the population to its present level is celebrated as a world-wide triumph of conservation.