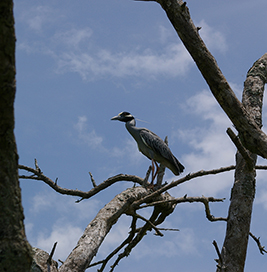 Yellow–crowned Night Herons are basically birds of the water’s edge, although in Bermuda they can be seen almost everywhere except densely built-up locations. These distinctive birds are most often seen along the south shore and around marine and freshwater ponds.

Yellow-crowned Night Herons are medium sized members of the Heron family. In common with all herons they have long necks and long legs. The Yellow-crowned Night Heron stands about 22-27 inches (56-69 centimetres) tall. The adult bird is slate-grey in colour with a black head. On the top of the head there is a yellowish crown and a plume of feathers directed back. There are prominent white streaks behind the bright-orange eyes. The legs are greenish. This heron does wade in the water while seeking food but is more often seen searching for its prey on land. The main item in the diet of these herons is the Red Land Crab (Gecarcinus lateralis) but they also eat other crabs, lizards, frogs and small toads. Yellow-crowned Night Herons nest in trees in the forest as well as in mangrove swamps. The nest is made of sticks and lined with finer material. The young birds (right) are streaked in light and dark grey and have fuzzy feathers protruding from the top of the head. These birds often roost in large groups in mangroves trees or quiet forest areas.

Once these birds are adult they are quite different from any other heron seen in Bermuda. The young birds are much less distinctive and can be easily confused with Black-crowned Night Herons (Nycticorax nycticorax), however, this latter species does not breed in Bermuda. Only adults are occasionally seen here.

Yellow-crowned Night Herons have an interesting conservation history in Bermuda. A closely related species was abundant here at the time of colonisation but gradually died out as their habitat decreased in size and they were taken for human food. In 1976-1978, 44 Yellow-crowned Night Herons were introduced to Bermuda from the Caribbean. The young herons were kept on Nonsuch Island, and were hand fed on Red Land Crabs. By 1986 the herons had spread beyond Nonsuch and breeding in the Walsingham area was observed. Before the now-extinct Night Herons became extinct in Bermuda, they naturally controlled the numbers of the Red Land Crab. With no herons the land crab population exploded and they became a problem on golf courses, where they excavated numerous burrows, which claimed golf balls. Now the balance is restored, or has even tended in the other direction with Red Land Crabs becoming quite uncommon. This situation needs further monitoring.