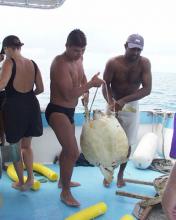 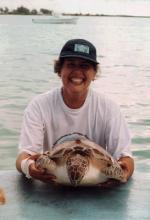 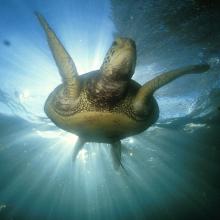 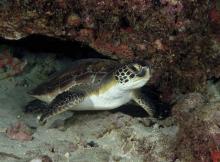 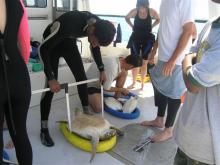 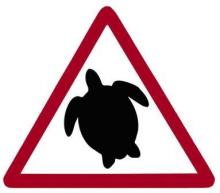 Bermuda once had a large assemblage of nesting and foraging adult green turtles. In spite of legislation adopted in 1620 to protect against the taking of juveniles, by the end of the 1700’s the adult green turtle population was so reduced by hunting pressure that a commercial harvest was no longer profitable. The law failed to halt the destruction of the breeding colony and there had been no evidence of green turtles nesting in Bermuda since the 1930’s until 2015, when a bounty of almost 90 hatched green sea turtle eggs was been discovered at the site of what is believed to be the first on-Island hatchlings for 100 years. This hatchling is believed to be the result of a translocation project conducted here between 1968 and 1978 when eggs from Costa Rica were buried in on the Island. The shallow reefs and sea grass meadows of the Bermuda Platform still provide foraging grounds for young hawksbill (Eretmochelys imbricata) and green turtles (Chelonia mydas) born elsewhere.

Bermuda's immature green turtles have been the focus of a tagging study initiated in 1968 by Dr. H.C. Frick, a trustee of the Caribbean Conservation Corporation. One of the first scientific investigations of this species in their juvenile developmental habitat, the Bermuda Turtle Project (BTP) continues today as a joint effort between the Sea Turtle Conservatory (STC), the Atlantic Conservation Partnership (ACP), the Bermuda Zoological Society (BZS), and the Bermuda Aquarium, Museum & Zoo (BAMZ).

With a mission to conserve sea turtles through research and education, the BTP focuses its research to provide new insights into the life history of sea turtles at a specific stage of their life cycle; the ‘benthic developmental stage’ in which juvenile turtles grow from the size of a dinner plate to nearly adult size. Over 3,500 green turtles have been captured, tagged and released, and the results have provided data on size frequencies, sex ratios, growth rates, genetic affinities, habitat preferences, as well as migratory routes from the island. Turtles tagged in Bermuda have been recovered in Nicaragua, Costa Rica, Panama, Cuba, Mexico, Dominican Republic, Grenada, St. Lucia, and the U.S.

Another important component of the BTP is the annual 2-week in-water course at BAMZ that builds regional capacity for the management of endangered sea turtles by providing training to university students, biologists, conservation officers and resource managers from countries throughout the Western Atlantic/Caribbean region.

The BTP also collaborates with the Wildlife Rehabilitation Centre at BAMZ to treat sick and injured sea turtles. While legislation exists to protect all turtles from intentional harm, accidental and incidental causes still contribute to local mortality.

Sea turtles are especially susceptible to the effects of consuming marine debris due to their bodies' own structure. They have downward facing spines in their throats which prevent the possibility of regurgitation. The plastics get trapped in their stomach, which prevents them from properly swallowing food. Also common is "bubble butts," turtles that float as a result of trapped gas caused by harmful decomposition of marine debris inside a turtle's body. The gases cause the turtle to float, which leads to starvation or makes them an easy target for predators.

Brochure on the course

Application form for the course: We are sad that Covid 19 has impacted so many lives and the resulting uncertainty means we cannot open the course this year to international students. The 2021 course is open for Bermuda residents only and will be dependent on Bermuda government guidelines.