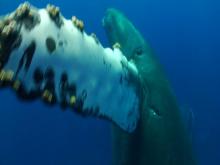 The Humpback Whale Film & Research Project, Bermuda was started in 2007 by Andrew Stevenson to study the humpbacks as they migrate past Bermuda and to document their lives with underwater, high-definition video footage and hydrophone recordings. The project is building a research database of humpback whale tail fluke identification photographs while also recording social behavior. The goal of the project is to broaden knowledge of our shared ocean about marine mammals and their environment with particular focus on the charismatic humpback whales. To this end, a 60-minute award-winning documentary film, “Where the Whales Sing” (award winner at the 2010 BLUE Ocean Film Festival and winner of the 2011 Masterworks Museum of Bermuda Art Charman Prize) and a large-format illustrated book, “Whale Song: Journeys into the secret lives of the North Atlantic humpbacks” (published in the UK and USA) have been produced.

The Humpback Whale Project has logged thousands of hours on the water studying the humpbacks pelagic social behaviour since 2007. This is probably the longest research period anywhere in the world devoted to studying the humpbacks in the middle of the ocean. Only 40 Bermuda fluke identifications were recorded from 1968 to 2006.  for almost daily updates on the research visit www.whalesbermuda.com.

Whale-watching has become a spring ritual off Bermuda as a large number of these magnificent marine mammals migrate from their winter breeding and birthing grounds in the Caribbean to their summer feeding grounds in Maine, Massachusetts, Newfoundland, Greenland and Iceland. As a mid-ocean seamount rising above the surface of the water, Bermuda represents a wonderful frontier of discovery into the migratory behaviour of humpback whales.

The findings obtained during the whales’ mid-ocean crossing are shared with marine biologists from around the world. Scientists believe this window into the migratory lives of humpbacks is essential to ensure the survival of whales in our shared regions