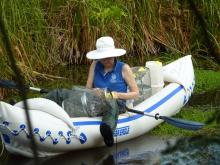 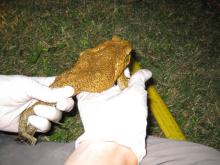 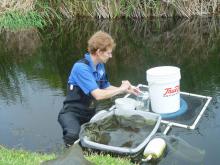 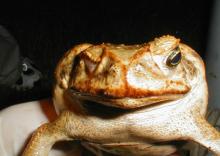 Launched in 1995, the Amphibian Project is now, however, much more than just an ‘amphibian’ project.  Initially the project focused on how pollution was affecting Bermuda’s cane toad populations (Rinella marina),  which exhibit alarmingly high rates of deformities.  More recently, this collaborative study expanded to include investigations of how pollution is affecting terrapins and pond fish, particularly Bermuda’s two species of endemic killifish, which are protected species.  The project also has examined the potential impact of contaminants on the health of other species, including humans.

Our studies revealed that sediments in at least 17 ponds in Bermuda contain toxic levels of petroleum hydrocarbons, including several polycyclic aromatic hydrocarbons (PAHs – produced by combustion and components of oils), and heavy metals. The current sources of these contaminants were found to include vehicle emissions and stormwater run-off from roadways.  Our laboratory and field investigations have linked exposure to these contaminants to a host of adverse effects in local wildlife including: 1) developmental deformities in toads and killifish, 2) gonad abnormalities in toads, terrapins and killifish, 3) impaired reproduction and endocrine disruption [significantly altered hormone levels] in killifish, 4) endocrine disruption in developing and adult toads, 5) liver pathologies [e.g. lesions, necrotic areas, tumors] in adult toads and terrapins due to contaminants in the food chain, and 6) suppressed immune function in toads.

The Wetlands Remediation Project, a project derived from the Amphibian Project and designated the HSBC Global Water Programme for Bermuda, is now investigating pond remediation.  It is using a two pronged approach: 1) aerating contaminated pond sediments to provide hydrocarbon degrading bacteria living in the sediment the oxygen they need to work effectively, and 2) installation of OPFLEX foam material in nearby stormwater soakaways to remove hydrocarbons and metals from road run-off.  Preliminary results show that aeration is working exceptionally well.