A Lucky resident of North Rock

If you have recently visited the Bermuda Aquarium, Museum and Zoo (BAMZ), you may have noticed two new additions to the North Rock habitat; a green turtle and a rainbow parrot fish. We'll explain in the next story about the parrot fish, but this story is about how "Lucky" the green turtle found a home at BAMZ.

Lucky was brought to BAMZ on July 3rd, 2016. He was collected off Marshall's island and was found floating on the surface with deep lacerations on his shell from a boat strike and a missing front flipper, likely through an interaction with a shark. Half of each hind flipper were also missing and the boat strike had paralysed his one of his hind flippers and weakened the other. To cap off this turtles problems, he was positively buoyant meaning he could not dive and stay at the bottom of the tank. 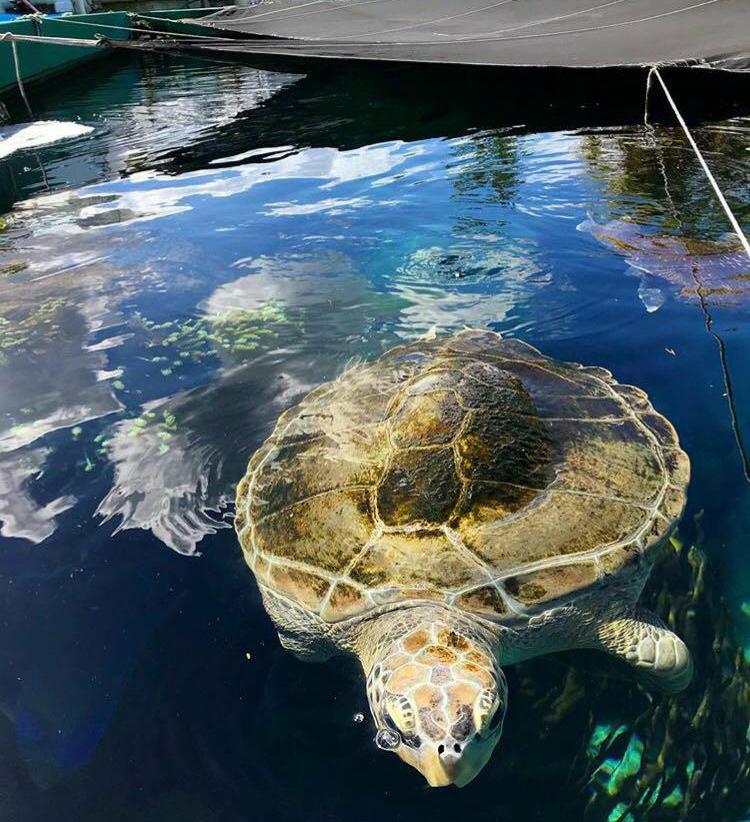 Lucky was admitted into the Wildlife Rehabilitation programme, a hospital for sick wild animals, with the hope that he could be released back the wild. Unfortunately the extent of his  injuries meant this is still far from certain.

In late February, after almost two years of rehabilitation, it was decided to place Lucky in the North Rock habitat. The aquarists believed that he would be unable to swim to the bottom, but at least he would have access to a larger roaming area.

This turtle definitely lived up to his name, because within a few days, the aquarists noticed that he was diving down on his own! With only one and a half working flippers and severe buoyancy issues, this "lucky" guy still found a way to make it to the bottom of his new habitat!

For now, Lucky will remain in the North Rock Tank. But, who knows what the future holds for this fellow. The animal health team and aquarists will continue to monitor his progress, and maybe one day he can return to the big blue ocean. Green sea turtles are a migratory species and the big question still to answer is whether he can survive a long oceanic journey.

Until then, be sure to visit BAMZ to take a look at Lucky as he glides through the North Rock!

Centenarian Winnie Oatley celebrated her 103rd birthday by planting a cedar tree at a nature reserve,

Students have been able to participate virtually in a programme teaching them about ocean conservation and how to be confident in the water.

Bermuda Zoological Society’s Kids On The Reef [KOTR] programme — sponsored by AXA XL — was held virtually due to the Island under lockdown last spring due to the Covid-19 pandemic.