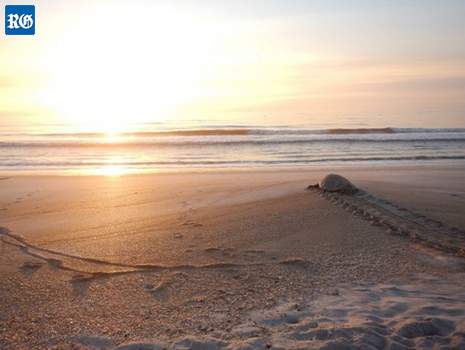 Jennifer Gray, the Bermuda director for the project, said the group was “thrilled” to receive reports of turtles that “grew up in Bermuda nesting on beaches throughout the region”.

Ms Gray explained that three turtles tagged in Bermuda by the Bermuda Turtle Project in the 1990s had been spotted on beaches in Costa Rica and Mexico.

She said a fourth green turtle, tagged in Bermuda in 1994, was freed by the volunteer South Ponte Vedra Beach Marine Turtle Patrol on a nesting beach in Florida in July last year after it became trapped in supports for a walkway.

Ms Gray added: “Results like this demonstrate the lengthy period it takes for sea turtles to reach sexual maturity and the habitat connections ranging far and wide across geographic boundaries.

“Our findings highlight the need for international co-operation to protect the species across the vast distances they travel and the many places where they develop, feed, mature and nest.

“The connecting of like-minded biologists and volunteers across the region serve as a powerful means to understand and protect sea turtles.”

Research into Bermuda’s green turtles by Dr H C Frick, a trustee of the Caribbean Conservation Corporation, started in 1968.

The Bermuda Turtle Project, a joint effort between the Sea Turtle Conservancy and the Bermuda Zoological Society, has continued the work.

Ms Gray said: “The project has learnt that Bermuda serves as an important steward for Caribbean and North Atlantic green turtles, providing a safe and healthy environment in which they can mature.”

She explained that nesting sea turtles were wiped out in Bermuda by the late 1800s and added that “the idea of sea turtles nesting on our shores again causes great excitement”.

Ms Gray said sea turtles in the region usually nest in the summer, with loggerhead turtle nests discovered on beaches at Coopers Island in 1990 and 1995.

She added: “Even more exciting was the discovery of a green turtle nest in 2015 on a beach at Building’s Bay in St George’s.

“Once nesting abundantly in Bermuda, it had been almost a century since such a sight was witnessed.”

But Ms Gray said genetic tests showed it was “highly unlikely” that they were the result of a restocking programme run in the late 1960s and early 1970s.

She added: “Nonetheless, nesting on our shores is cause for celebration and gives us hope for a future of nesting sea turtles in Bermuda.” 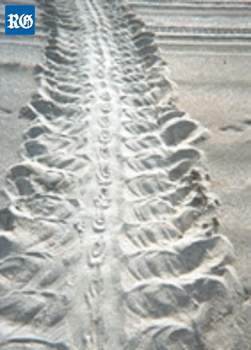 Ms Gray explained that knowing what to look for can help people spot turtle nests.

She said the track of a nesting sea turtle was “like a large single tractor tire going from the direction of the sea up the beach to the dune”.

Ms Gray added that another similar track would lead back to the sea from a disturbed area.

“These tracks soon disappear with high tides and ocean breezes which blow sand across the top of the track.”

Ms Gray said hatchling tracks are harder to spot because they are smaller and shallow.

She added: “But if a hatchling is disoriented many small tracks might be seen that do not lead to the ocean. 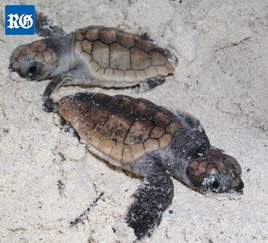 “These should not be confused with the tracks of a hermit crab which are one-sided.”

Ms Gray added that nests could also go undetected because sea turtles nest and hatchlings mostly come out at night.

The public is asked to report possible nesting activity to Ms Gray on 332-2966 and to report distressed turtles to the Sea Turtle Hotline through the Maritime Operations Centre at 297-1010.

Reports of sea turtles in distress can also be made at the Bermuda Turtle Project Facebook page. 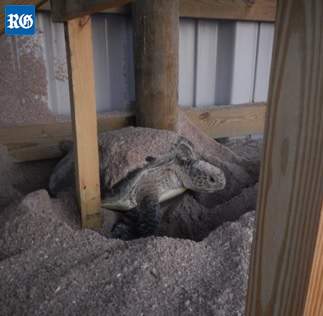 A sea turtle that was accidentally caught by a young girl has been successfully rehabilitated following surgery to remove a fishing hook, with a group gathering today [Feb 8] at the Bermuda Aquarium and Zoo [BAMZ] to make the announcement, while also educating the public on how injured sea turtles should be handled.

LOM Financial gave away $25,000 to charity at an event to mark its 25th anniversary.