Expert: hammerhead no threat to humans 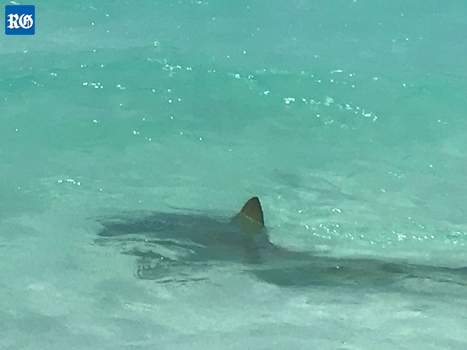 Choy Aming, who has researched the creatures for 12 years as part of the Bermuda Shark Project, said that it is not unusual for hammerheads to swim close to the beach.

He added sightings close to beaches were rare in Bermuda because of the low numbers of hammerheads, but that they were not considered aggressive.

Mr Aming was speaking after a young hammerhead was spotted off Shelly Bay at the weekend.

He said: “I wouldn’t panic but would err on the side of caution. Shelly Bay is a giant sand flat — you will see it coming.

“If you have a kid in the water, get them to shore and show them the shark.

“If the shark is startled, it will probably take off.”

Mr Aming added: “Outside of us chumming up the water and trying to get close over the years, I have never seen an aggressive move by a hammerhead.

“I think if you had kids in the bay swimming, it would probably cruise around and not bother them.

“There are tons of pictures of the Bahamas and Florida where there are people swimming with sharks.

Mr Aming said the shark could be the same one spotted at Flatts Inlet, St George’s and Admiralty Park in Pembroke in the past few weeks.

He was backed by Thaddeus Murdoch, chief scientist for the Bermuda Reef Ecosystem Assessment and Mapping Programme, who said the shark probably came close to shore to feed on marine life.

Dr Murdoch said: “When I heard about the shark turning up in Flatts Inlet, I would have thought it was a one-off but if it is the same juvenile, it appears to be settling in.

“We have a good population of turtles and eagle rays he could be feeding on. Both of them are protected and in pretty good shape, so he could have cruised into the reef and saw there were no competitors.

He added: “I’m sure the shark is looking for food. Shelly Bay has a school of red-eared herring, some mullet and the occasional eagle ray at this time of year. I’m sure it would rather avoid people. It is hard to say if it’s the same guy.”

Dr Murdoch agreed the best approach is not to panic if the shark is sighted.

He said: “I would calmly move out of the water if it returned but otherwise just keep a watch out.”

Mr Aming dismissed speculation that the shark was looking for a mate.

He said: “It is six feet long, a juvenile, so it’s not looking for a mate.”

Mr Aming added: “A few people have said why can’t you put it back out to sea?

“Just because it decides to come into Shelly Bay, it doesn’t mean it is out of its home. Even if it is in two feet of water in Shelly Bay, that is its home.

“Others have said maybe it’s injured. If it is the same shark swimming happily after three months that it highly unlikely.”

Jason Sukdeo, organiser of National Heroes Weekend, said the raft up scheduled for Shelly Bay on June 16 is to go ahead as normal.

Mr Sukdeo said two lifeguards and a St John Ambulance crew would be on duty, but emphasised they were recruited before the shark sighting.

The Royal Gazette contacted the Department of Environment and Natural Resources for information and advice but did not receive a response by press time.

A sea turtle that was accidentally caught by a young girl has been successfully rehabilitated following surgery to remove a fishing hook, with a group gathering today [Feb 8] at the Bermuda Aquarium and Zoo [BAMZ] to make the announcement, while also educating the public on how injured sea turtles should be handled.

LOM Financial gave away $25,000 to charity at an event to mark its 25th anniversary.