TUESDAY, APRIL 17: RUBIS has gifted a year’s worth of diesel boat fuel to the Bermuda Zoological Society, it was announced today.


Aquarium shark released back into the wild
Tuesday, March 20, 2012


A shark called Osbourne has been released back to the sea by the Bermuda Aquarium and Zoo.


Osbourne the shark went from the North Rock Exhibit to North Rock itself as he was released into the wild.


MONDAY, MARCH 19: The Department of Conservation Service today announced that it has released its seven-year-old male Galapagos shark back into the wild for health reasons.


Newswise — Sea turtles have long and complex lives; they can live into their 70s or 80s and they famously return to their birthplace to nest. But new research suggests this isn’t the only big migration in a sea turtle’s life. 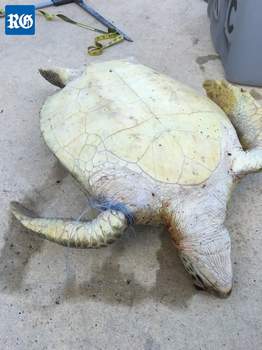 The call came after a young green turtle died in the waters off Lagoon Park, in Sandys, after it got entangled in monofilament line attached to a boat mooring.

The animal had been seen circling the mooring by local residents two days earlier, but no one had realised it was trapped.

A concerned citizen contacted Patrick Talbot, the curator of the aquarium and zoo, on Sunday afternoon, but by that time the animal had died.

Mr Talbot said: “I confirmed that the turtle was spotted two days earlier hanging around the mooring by a member of the public.

“They were concerned on Saturday that there might be a problem as it was still there, but when the turtle was approached, it dove underwater and out of sight. Unfortunately, it drowned late on Sunday morning.

“Unfortunately, in this case, we were not able to get to the animal in time. The sooner we know, the better chance we have of saving the turtle.” 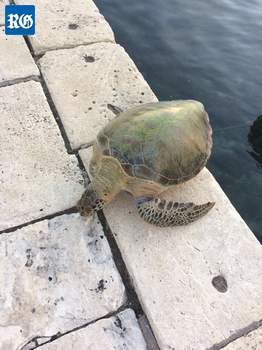 Earlier this summer, a loggerhead turtle rescued by divers was returned to the sea after nine months of care.

The turtle, nicknamed “Chad” by his rescuers, was found tangled in cargo netting in Ely’s Harbour last October by Blue Water Divers.

Ian Walker, principal curator of the Bermuda Aquarium, Museum and Zoo, said: “We are always grateful when the general public contacts us to try to save wildlife. If you suspect an animal might be tethered in place via entanglement with fishing line or other materials, please call us as soon as possible so we can investigate.

“An entangled animal that is tethered will be seen in the same place over a period of hours. “They may have trouble diving or getting their head above water and they may look like they are circling something such as a mooring buoy. In these cases, time is of the essence if we are to save the animal from injury or death.”

Dr Walker added: “Unfortunately, this is the second recent case of tethering entanglement that we have seen and we felt it was important to alert the public so they can be aware of animals in this type of distress and act accordingly.

“As always, we encourage the general public to pick up fish line and hooks if they find them discarded along our shorelines as they can become lethal traps for our wildlife.”