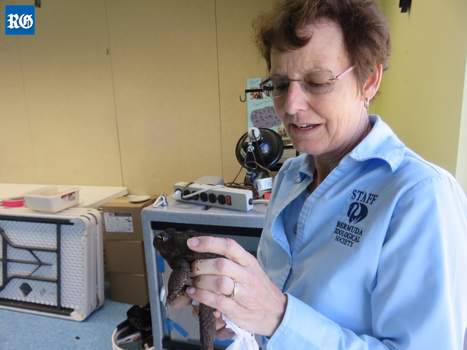 Combination of factors: Jamie Bacon, a researcher and educator for the Bermuda Zoological
Society, looks after a toad exhibiting deformities from pollution (Photograph by Jonathan Bell)

Jamie Bacon, the principal investigator for the Bermuda Amphibian Project, run by the Bermuda Zoological Society, said a fall in the toad population meant a boom for nuisances such as centipedes. Dr Bacon added: “I wouldn’t be surprised if centipedes are able to move into areas where they haven’t been before.”

She said cane toads were rare in the East End of the island, so centipedes thrived as a result.

Dr Bacon said she had heard centipedes had appeared in new locations such as Somerset and Spanish Point, although there was no data to show the extent of their spread.

The BZS’s wetland research has found a variety of other contaminants — including toiletries and antibiotics that have worked their way into island ponds after being flushed down toilets.

Dr Bacon said: “It shows you that what comes out of our cesspits does not go straight down, but can move laterally in the water table.”

A combination of factors have hit the island’s cane toads, a major consumer of insects like cockroaches, which were introduced to the island in the 19th century.

The amphibians secrete poison that makes their eggs and tadpoles toxic to most predators.

But the young toads that make their way on to land are prey for birds, particularly another introduced species, the yellow-crowned night heron.

Dr Bacon said: “We’ve also lost a lot of cane toad breeding sites, so that when the cane toads in your yard die off, there are often no places nearby where toads migrate from to replace them.”

Dr Bacon added: “We don’t know yet what effects the toiletries might be causing, but we feel they aren’t having nearly the effect that we see with the hydrocarbons and metals which are at much higher concentrations.”

Cane toads, the world’s largest species, originated in South America but have been introduced worldwide to eat agricultural pests — and have become pests themselves.

Bermuda’s cane toads began to show deformities in 1998 traced to hydrocarbon pollution, which also interfered with their ability to reproduce.

The zoological society has run a wetlands remediation programme that won support from HSBC in 2014, and has cleaned up Cloverdale Pond in Smith’s and Evans Pond in Southampton. Dr Bacon warned: “This is what we’re seeing in wildlife — keep your eye on anything like this happening to people.”

Tadpoles can be collected at this time of year from toad breeding sites and raised for release into gardens, as long as there are wet places for them to take cover during the day.

Dr Bacon said medicines can be burnt or disposed of at pharmacies instead of flushing them down toilets. She added: “You can also use the least toxic pesticides that you can.”

Lemurs check-in and check out their new home
Thursday, May 31, 2012

Three ring-tailed lemurs have been introduced to the Madagascar Exhibit at Bermuda Aquarium, Museum and Zoo.

TUESDAY, MAY 29: Three new Bermuda residents—a trio of ring-tailed lemurs—are getting used to their home inside the Madagascar Exhibit at Bermuda Aquarium, Museum & Zoo.

A group of students from Bermuda College and New York’s St. John’s University has spent most of the past fortnight exploring the Island as part of a course to “Discover Bermuda.”

Company is thanked for helping to house Orana the fossa
Wednesday, May 16, 2012

Orana the fossa, a popular creature at the Bermuda Aquarium and Zoo (BAMZ), had her enclosure dedicated to a reinsurance company who helped fund her home.