Excerpt from WILD News May 2018 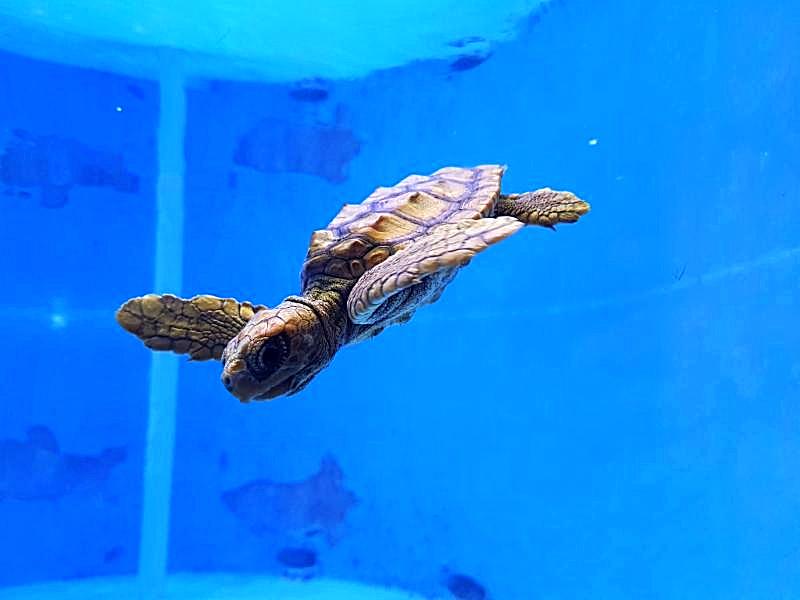 This is Sheldon, a juvenile loggerhead turtle. Between December and March juvenile sea turtles (loggerheads, hawksbills and green sea turtles) will be swept up past Bermuda as they drift with their transient home of Sargassum. Sargassum is brown algae found in the Atlantic Ocean that forms dense floating masses called rafts which provide shelter, transport and food for many organisms. During this stage of their life (post hatchling), turtles are carried around with the currents. The Sargassum provides food such shrimp, tiny crabs and fish. Sea turtles eat whatever floats by and this often gets them into trouble. The Sargasso Sea is located in the North Atlantic Gyre and collects lots of microplastics. Sea turtles are not picky eaters and may eat the plastics This can cause an impaction of their digestive tract which can be life-threatening. 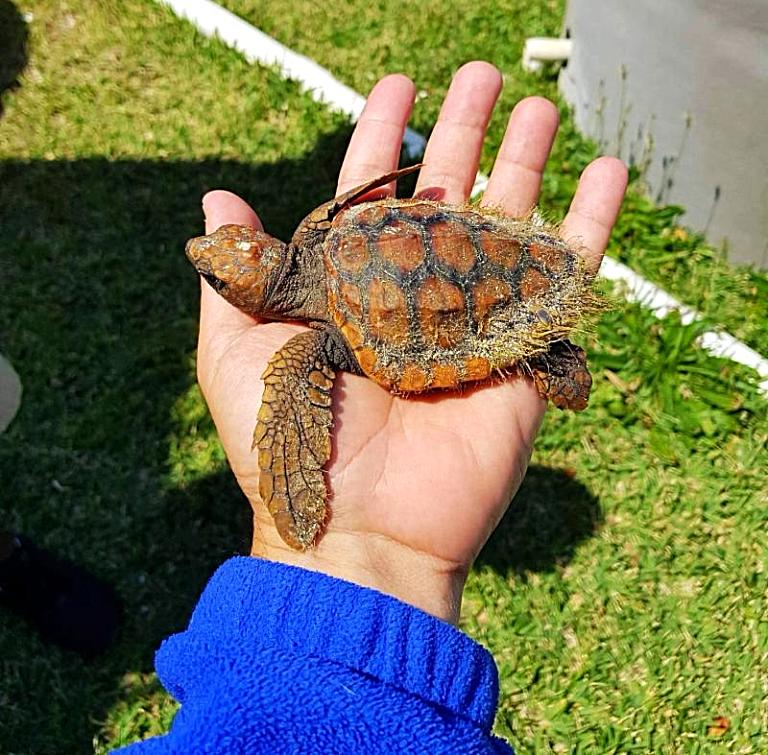 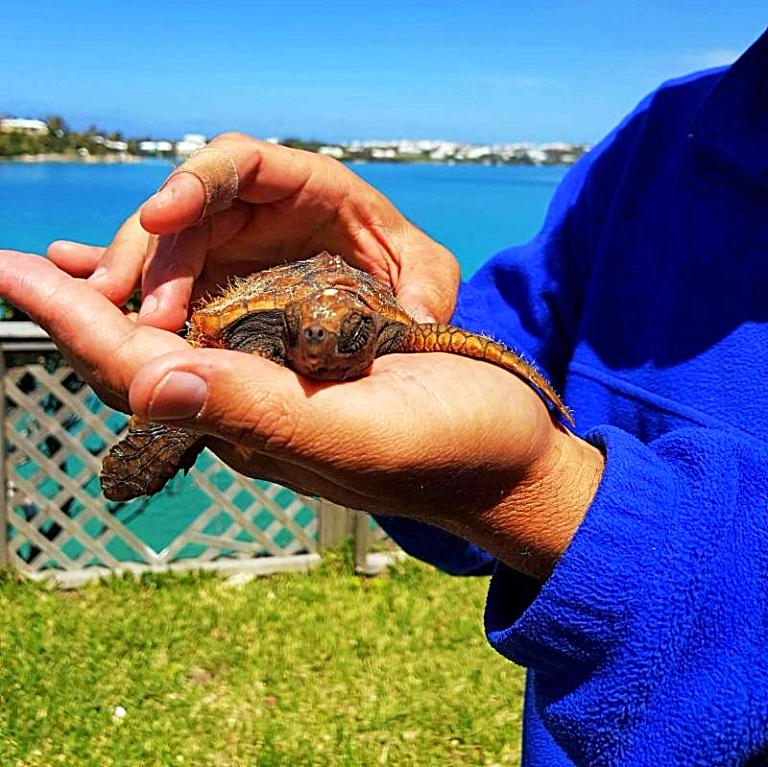 As they pass by Bermuda, they may be washed ashore by a winter storm or get picked up by birds that later drop them. As a result, these little critters can end up on one of our beaches or dropped amongst the rocks. The Wildlife Rehabilitation Department at BAMZ sees one or two post hatchling sea turtles a year. These post hatchlings are three to four inches in length and tend to be thin and exhausted from their journey. Because of their tiny size, they may have sustained injuries from predator attacks. We monitor them and give them time to rest and regain strength. Any injuries are treated and an appropriate amount of time is given to heal. We wait until the water warms up and we see large rafts of Sargassum returning offshore (May or June) before releasing them. By this time they have grown six to eight inches long. The release is done offshore so they can pick up the currents under a Sargassum raft and continue on their ocean journey. They will return to Bermuda again in 3-4 years as they move from their pelagic lifestyle to the reef shelf. 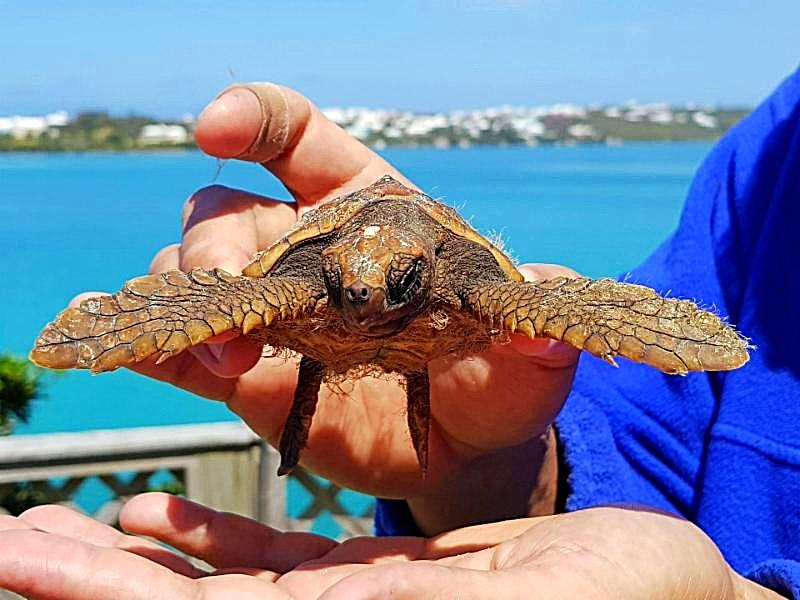 The current juvenile loggerhead was found on the beach at Willowbank on March 30, 2018. It appears healthy and is gaining weight. We hope to get it back out to the big blue in the near future. Note the tank it is currently in is actually the perfect spot for it at the moment. It would normally be in the open ocean all day in a vast sea of blue, and only given shelter by a Sargassum raft. The blue background is exactly what it would be seeing in the wild. Also, we can't tell the sex of the turtle at this age without a blood sample, so the sex remains unknown. 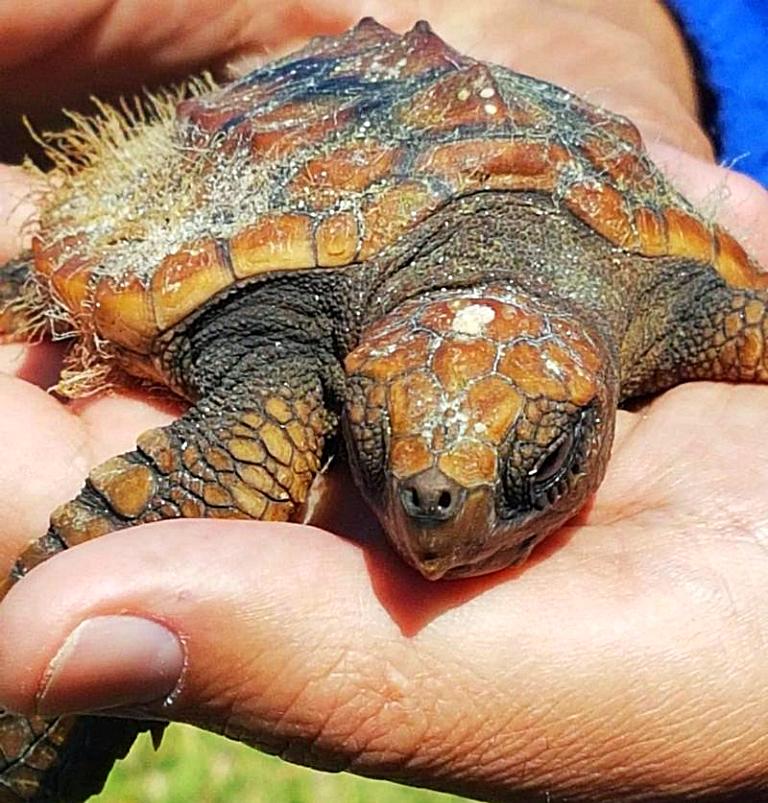 FRIDAY, JUNE 13: The Bermuda Alliance for Sargasso Sea formed last June with the intention of supporting a government led plan to protect the Sargasso Sea and the multitude of species that live within it. The Bermuda Sun sat down with four of the BASS member charities to discuss their mission so far.

Flamingo flockings are over
Tuesday, July 10, 2012

After a month of flockings, the Bermuda Zoological Society’s pink plastic flamingos are returning to their storage roost until next year.

‘We hope it inspires them to become environmental stewards of the future’
Friday, June 29, 2012

Maybe some of them will pursue a career in conservation and become the next David Wingate or Jeremy Madeiros.

FRIDAY, JUNE 8: Legendary oceanographer Sylvia Earle described the Sargasso Sea as the “golden floating rainforest of the Atlantic Ocean” and now ten local non-governmental and environmental groups have teamed up to raise awareness about its importance.