An effort to establish a series of “micro forests” across the island has established ten thriving plots, according to the Bermuda Zoological Society.


The Bermuda Zoological Society [BZS] has highlighted the BZS Micro Forest Project, which has an aim to plant 1,500 native-compatible and endemic plants each year for three years.


BZS just misses out on award recognising use of drone technology
Monday, November 07, 2022


An island charity was shortlisted for an international award for its use of drone programming.

The Bermuda Zoological Society was nominated for a Drone Deploy Award for its use of Drone Deploy, an internet-based drone mapping programme.


Over the summer the Bermuda Zoological Society (BZS) had the privilege of affording a multitude of student summer positions at the Bermuda Aquarium, Museum & Zoo (BAMZ), through internship programme placements and volunteer opportunities. Within these roles the students were able to gain industry experience, explore the different areas of the facility, gain volunteer hours for their academic year, and acquire mentorships for their future within the industry of environmental studies and conservation.


Event to give young people a say in Blue Prosperity Plan
Friday, October 21, 2022


Young people were invited to provide input on how Bermuda can mitigate long-term threats such as climate change as part of a consultation on The Draft Blue Prosperity Plan. 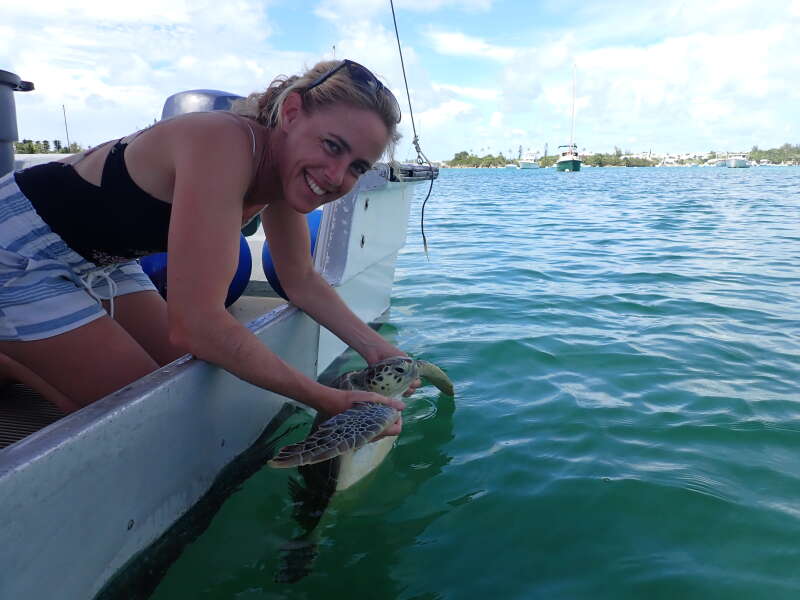 One of the highlights of the year for Gaëlle Roth is the Bermuda Turtle Project’s annual turtle round-up.

“The number of turtles captured was about a third of what it once was,” Dr Roth said. “We have never seen such a drastic change as we are seeing now.”

Green turtles are vegetarians that normally like to stick to the same sea grass beds, year after year.

“We once caught the same turtle 17 years apart in the same spot,” Dr Roth said.

But in the past few years, the turtles they found were swimming randomly around the island, skinny and hungry.

“Obviously, everyone wants to see thriving turtles,” she said. “I reminded the participants that even if we go to a site and catch zero turtles, that is important data. It is important to keep monitoring.”

The plummet in capture numbers is thought to be linked to a reduction in the sea grass beds themselves and no one is entirely sure what is triggering that. Theories range from pollution being the cause to climate change. Some scientists are even blaming the turtles themselves, saying they are overeating the sea grass, a theory Dr Roth rejects.

“This is an animal that has lived in harmony with the sea grass for millions of years,” she said. “How could it now destroy its food source?”

She said sea grass beds were declining globally, including in places where there are no sea turtles.

She believes the mostly likely culprit is human impact.

“It is hard to pinpoint just one thing,” she said. “We have climate change. We have more storms and temperature changes and pollution, not just from boats, but also land-based pollution.”

She said everything we did on land ended up in the ocean.

“We have had a lot more development in the last 20 years,” she said. “There are a lot more people living around the water.”

These can kick up sediment that will cover the sea grass and disrupt its metabolism.

Algae blooms, associated with pollution and rising water temperatures, can also suffocate the sea grass and reduce the light necessary to grow.

And sea grass is not only important for turtles.

“That is our fish nursery and carbon dioxide storage and keeps our water clean,” she said.

But she said there was always hope. One way she is tackling the problem is by raising awareness.

This evening, she will be speaking in New York at a presentation called Heart of the Sargasso Sea: Bermuda’s Marine Conservation. The event is organised by the Atlantic Conservation Partnership, a sister organisation to the Bermuda Zoological Society, in partnership with The Explorers Club NYC.

Her talk is A Turtle’s Lost Years in the Bermuda Triangle.

Several other local conservationists such as Choy Aming, principal investigator of the Bermuda Shark Project, whale researcher Nan Hauser and David Freestone, executive secretary of the Sargasso Sea Commission, will also speak. The goal is to highlight the uniqueness of Bermuda’s ecosystem.

Dr Roth initially trained as a veterinarian in her native Belgium. She came to Bermuda to work for Ettrick Animal Hospital in Warwick in 2008, a year after graduation.

While working part-time, she volunteered at the Bermuda Aquarium, Museum & Zoo, helping with animal wellness checks.

It was here that she was first introduced to green turtles.

“People would bring them into the rehabilitation centre if one was stranded,” she said. She was fascinated.

Dr Roth said: “A turtle is a keystone species. They tell a lot about what goes on around Bermuda. I thought this is something completely different. These are animals that have been around since the time of the dinosaurs.”

Her work with turtles inspired her to enter the University of Edinburgh’s online postgraduate diploma conservation medicine programme.

While she worked towards that she applied to the Bermuda Turtle Project’s summer programme. “I applied a few times,” she said. “It took me a few years before I was able to get in, and then as a student participant.”

Once she was in, she found it an intense two weeks.

“You need to be fit, a good swimmer and strong,” she said. “You are swimming several hours a day monitoring the capture net. You are diving down and holding them and manipulating them carefully.”

She graduated from the University of Edinburgh in 2020 and took on the role of director of the project earlier this year.

Now she says the plight of Bermuda’s sea turtles is definitely keeping her up at night.

“If we lived in a healthy, environmentally balanced world, I would sleep better,” she said.

She said what was happening to the green turtle could be a canary in the coalmine situation.

“This is something that impacts us all,” she said. “We are a small island. If something is changing we see the immediate effects. We need our corals and sea grasses to protect the island. We need to be working for a much more sustainable way of life.”

But she said it was important not to give up hope.

“We need to raise awareness,” she said. “Don’t anchor your boat in a sea grass bed. Prop up your engine so you don’t scar the sea grass beds. Use sea grass-friendly moorings, because that will do a lot of damage to them. Don’t allow development where the sea grass is.”