Two charities reaped $11,000 each thanks to an enduring fundraiser by Hamilton Lions Club.

The proceeds from the club’s 53rd annual Gas-O-Rama and raffle draw were presented to Vision Bermuda and the Bermuda Zoological Society. 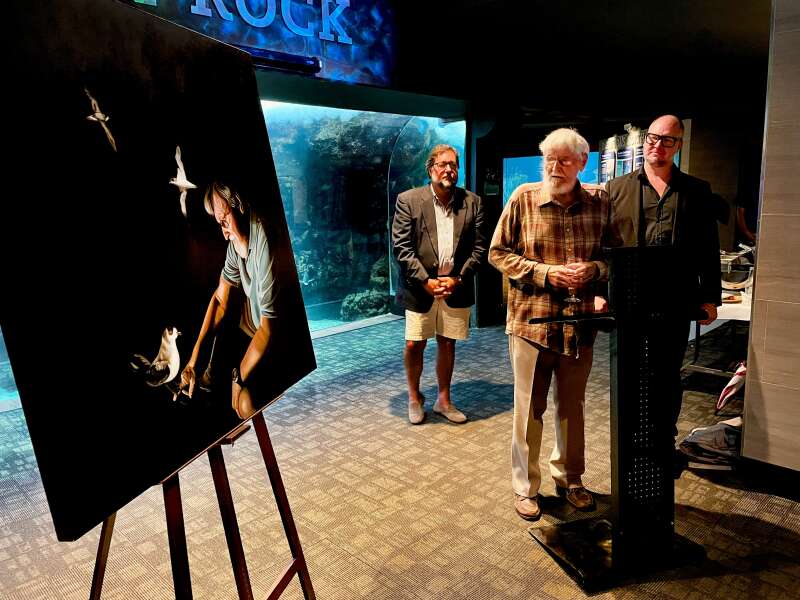 A leading conservationist was presented with a portrait of himself in honour of his work.

Ornithologist shows David Wingate helping a fledging Cahow from its nest with two of the seabirds in flight behind him.

A dedication event was held at the Bermuda Aquarium, Museum and Zoo on Saturday.

The painting is part of From Darkness to Light: Portraits by Henry Ward, which opened at the Bermuda National Gallery this week and highlights people from the island’s diverse communities.

Peter Lapsley, the BNG executive director, said that the gallery was “deeply honoured” to receive the painting, donated by the Bermuda Zoological Society.

He added: “This artwork not only honours David Wingate, a Bermudian whose work has had such substantial and positive impact on our island, but provides BNG with important exhibition and learning opportunities for the community for future generations.

“It is a wonderful addition to BNG’s collections.”

Dr Wingate is a world-recognised conservationist who worked to bring back the Cahow, Bermuda’s national bird, from presumed extinction.

At the age of 15, he was the youngest in a group of naturalists in a 1951 expedition, which made science history with the finding that brought back the elusive seabird.

A Bermuda Zoological Society spokeswoman explained: “Buoyed by this amazing discovery and his natural interest, he pursued a BSc degree in Zoology from Cornell University in 1957.

“Following graduation, he returned to Bermuda and took charge of the Conservation Programme for the Cahow on grants from the New York Zoological Society and the Bermuda Government.

“This challenge became the driving force of his career during which time he conceived and almost single-handedly transformed Nonsuch Island into a ‘living museum’, on which he took advantage of the island’s isolation to replicate the precolonial ecosystem of Bermuda.”

She added: “Under his watch, the Cahow trebled in population and Nonsuch Island has attained international recognition as a leading example of restoration ecology.

“Both these projects required tremendous hard work, commitment and self-sacrifice to accomplish and have provided Bermuda with not one but two jewels that will only further enrich Bermudians and visitors now and going forward.”

Walwyn Hughes, a former Director of Agriculture and Fisheries and a friend of Dr Wingate’s for 65 years, said at the dedication event: “When faced with challenges in the field of conservation, David Wingate has had the rare ability to visualise big picture solutions.

“He has been prepared to commit the effort, energy and time necessary to implement these solutions, as evidenced by the hugely successful Cahow recovery and Nonsuch Island projects.”

* From Darkness to Light – Portraits by Henry Ward is open to the public at Bermuda National Gallery from Tuesday to Saturday through to mid-October 2022. For more information visit www.bng.bm.