The Bermuda Zoological Society has selected the recipients of the Steinhoff/BZS scholarship and, for the first time, the Pye Scholarship, with Amber Reid, Ryan Dowling, Archer Hill and Jessica Godfrey all being awarded scholarships.


The oldest harbour seal at the Bermuda Aquarium, Museum and Zoo has died at the age of 35.


A pilot programme of community celebration, organised by the group Imagine Bermuda, marked a success at the Bermuda Aquarium, Museum and Zoo.


The Bermuda Turtle Project is celebrating half a century of the protection and study of sea turtles. 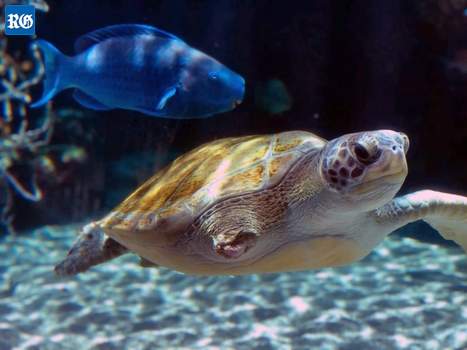 According to the World Oceans Day organisation, “plastic pollution poses a threat to human health, kills and harms marine life, damages and alters habitats, and can have substantial negative impacts on local economies. Research from the Ocean Project shows that pollution, especially plastics pollution, is already widely accepted as a big problem that we need to and can address.”

“The primary direct threat to marine life is entanglement or ingestion. Sea turtles, birds, and fish alike accidentally mistake plastic for food and choke or get sick by ingesting it. It’s distressing to think about how much plastic is almost unavoidable — sometimes, it can seem useless to take action. But if many of us act together, we can reduce the amount of plastic in the ocean, and show the world that we demand less disposable plastic in our everyday lives!”

At the Bermuda Aquarium, Museum and Zoo (BAMZ) we continuously encounter situations involving plastics and our marine life. These situations include turtles who become entangled in fishing lines, which can lead to loss of flippers or even the death of the animal. Ingestion of plastics also cause major problems in preventing animals from digesting food because of blockages in their intestinal tract.

Ocean plastic debris is not only a serious concern for marine life, but it can also be dangerous to human health! Scientists are finding that chemicals in plastic consumed by fish eventually travel up the food chain — and get into our bodies. So, by littering, we are not only poisoning the environment, we are also poisoning ourselves.

The Bermuda Zoological Society is asking its members and the entire community to play a part in plastic prevention by saying “No” to plastic. Substitute plastics for biodegradable materials, and when you visit the beach this summer collect 3 pieces of plastic and dispose of it in the proper receptacle.

As part of the celebration of the 50th anniversary of the Bermuda Turtle Project, on June 27th, Dr. Ian Walker, Principle Curator at BAMZ will be giving a lecture at the BAMZ on wildlife rehibition and the impact plastic pollution has on our environment, particularly sea turtles. Come out and learn what we do to save our marine creatures!