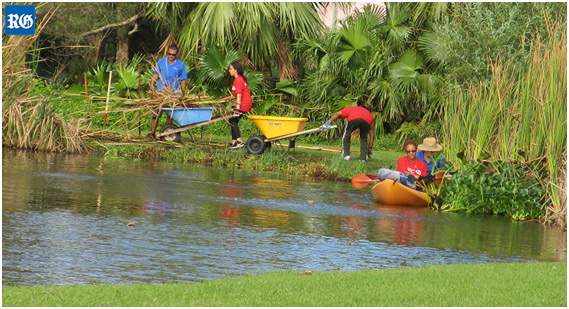 Cloverdale Pond in Smith’s and Southampton’s Evan’s Pond, a refuge for endangered species, were improved through the Bermuda Zoological Society’s wetlands remediation programme.

The scheme, which became the HSBC global water programme for Bermuda in 2014, was designed to remove toxic petroleum compounds from ponds.

The build-up of the poisonous hydrocarbons is a threat to the island’s two endemic killifish species, as well as native diamondback terrapins, which are a protected species.

The compounds, which come from oil, water runoff and vehicle exhausts, can be broken down by bacteria when the pond sediments are aerated.

The two-year grant from HSBC allowed the proposal to be tested in the field.

Volunteers also took part, with help from the Department of Environment and Natural Resources.

The BZS said Cloverdale was chosen first because of its small size, its “known severe effects on wildlife” and the absence of protected species in the water.

Evan’s Pond was selected as the second test site because of its small population of killifish.

The ponds were divided into sections and aerated for six to eight hours a day with solar powered compressors.

Hydrocarbon levels saw a major reduction over the course of a year.

The next site for remediation is the South Pond at the Mid Ocean golf course, where the hatching of diamondback terrapins has been hampered by pollution.