Endangered predators may lead to erosion of reefs 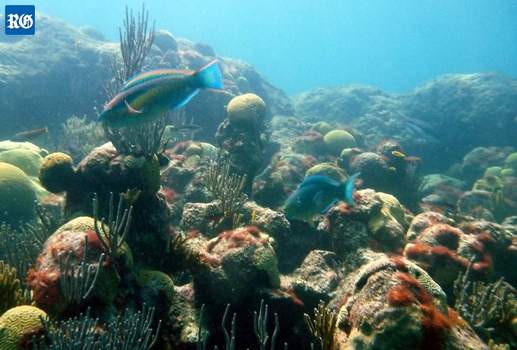 Predatory fish numbers are at critically low levels, a new report has warned.

Thaddeus Murdoch, chief scientist at the Bermuda Reef Ecosystem Assessment and Mapping programme, added that if the problem is not dealt with, it is “highly likely” the island’s reef system will erode away.

Dr Murdoch explained that Bermuda’s low predator count had led to an explosion in the number of coral-killing damselfish, whose population has doubled in the area since 2010.

He added that had reduced reef quality across an area bigger than Bermuda’s landmass.

Dr Murdoch said: “Large predators like black grouper carry out important work by managing the numbers of small and large parrotfish on the reef.

“Smaller predatory fishes such as red hind, coney and grey snappers do much more than just provide a source of food, as they keep coral-killing damselfish from increasing and causing damage to reefs.”

He added: “Bermuda’s coral reefs protect the island, give us food and provide exciting experiences for locals and tourists alike.

“However, our reefs, along with those across the world, face destruction from an increasingly acidic ocean and increasingly violent storms.

“Our reefs can face these serious threats, but only when predatory fishes like grouper and snapper, as well as plant-eating fish like parrotfish and surgeonfish, are abundant, marine seaweeds are sparse, and hard corals are healthy.”

Dr Murdoch said: “We oversee the condition of our reefs as if they are primarily a fisheries concern. Reef condition is a tourism and coastal protection issue, and should be managed accordingly.”

He was speaking after the release of a report into the health of the island’s reefs and fish population in 2016 was released.

The report was prepared by Dr Murdoch and a team of researchers through the Bream programme.

Dr Murdoch said Bermuda could restore the predatory fish population by restrictions on the commercial and recreational catch of groupers and snappers and a limit on the sale of predators during spawning season. He added an expansion of the seasonal prohibition and increase in protected spawning areas where necessary, as well as improved marine resource enforcement would also help.

Dr Murdoch said: “Our centuries-old Bermuda reef fishery, and the multigenerational livelihoods that it provides, can only persist if we maintain the numbers of our breeding groupers and snappers.

“If we fail to protect our fish and coral reefs, then bigger waves will hit the shore, and our beaches will change from pink sand to rocky rubble.”

The report contained information collected from 2004 to 2011 and compared it to updated data collected by a fresh survey of the reefs in 2015 and 2016 by Dr Murdoch and his team.

The Department of Environment and Natural Resources did not respond to a request for comment.

The Bream report is available at www.bermudabream.org

Aurum Fund Management Limited has donated $12,500 to the Bermuda Zoological Society [BZS] to aid in the creation of a saltwater pond to support the growth of Black Mangroves on Trunk Island.

A spokesperson said, “The Bermuda Zoological Society is happy to announce that Aurum Fund Management Limited have donated $12,500 to the creation of a saltwater pond to support the growth of Black Mangroves on Trunk Island – the BZS ‘Living Classroom.’ An anonymous donor also assisted with funds for the project.

The Bermuda Zoological Society will be holding the annual Zoom Around The Sound event on Saturday, September 18th.

A spokesperson said, “Are you ready to zoom with the Bermuda Zoological Society? Join the annual Zoom Around the Sound event on Saturday, 18th September and help the BZS raise funds for their education and conservation programmes.