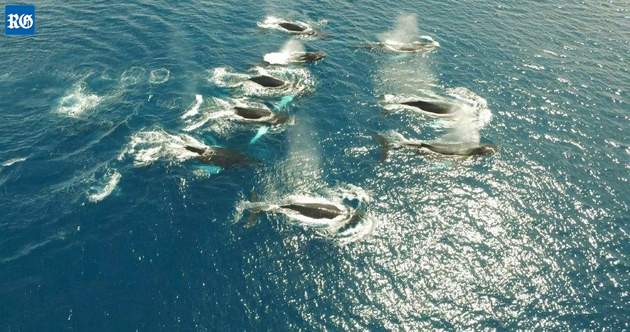 Mr Stevenson also believes that he now has one of the largest databases in the world held by just one person.

He plans to use them to make scientific conclusions about threats posed to whales, such as global warming.

Mr Stevenson said: “I’m in the process of making my second documentary film, a follow-up to my previous documentary which came out in 2010.

“I have another eight years of underwater footage and three seasons now of aerial footage.”

Mr Stevenson will show his aerial footage an speak about his research in a lecture at the Bermuda Underwater Exploration Institute on Sunday.

He said: “The aerial footage is a complete game-changer for me. Before I had to guess what the whales were doing whilst observing them from my boat.

“I would see a blow, a swish of a tail, and not a lot more. Underwater I would only be able to observe them if they came to me and remained with me.

“Examining the footage on my large, curved 4k screen at home, I can see incredible detail. I can make a very good guess at which whales are males, I can easily recognise a calf, a yearling or a juvenile. I can tell the health of the animals by their girth and the vertebrae.”

He said the aerial footage had helped him answer some questions about the whales’ behaviour such as detailed social interactions.

“But the more I learn, the more I realise I don’t know anything about the humpbacks. What is very clear is that they are highly complex social animals and you must see the aerial video to understand what I mean.

“It’s all about Bermuda’s greatest asset, the ocean all around us.

Mr Stevenson, who has a research permit issued by the Department of Environment and Natural Resources, Ministry of Environment and a commercial small unmanned aircraft license issued by the Bermuda Civil Aviation Authority, has recently dropped two hydrophones in 150ft of water off Sally Tuckers and Challenger Bank to recording humpback whales as well as dolphins and other beaked whales.

He said: “I gave three presentations at the biennial conference of the Society for Marine Mammology in Halifax last October and while there met the CEO of Jasco Applied Sciences. We formed a partnership to drop two hydrophones off Bermuda.

“If we combine the fact that we have a window into their mid-ocean migratory crossing and we have indications that they are maintaining fidelity to a fixed timetable, then we have an animal that acts as an index to the ocean’s health, just like the canary the miners took into the mines to determine if there was a problem with the quality of the air.

“The ocean is at risk. It could be global warming, melting of the Arctic ice cap and deflection of the Gulf Stream with resulting impacts on the food web. The humpbacks are our giant canary, telling us there is something wrong with the quality of our ocean.”

“It surfaced every minute and a half and then sank out of sight. It’s the fourth entangled whale I have encountered in Bermuda. I will now be taking a Government of Canada authorised and sponsored disentanglement course given to Canadians who have worked with whales over many years and in a position to manage a disentanglement.

“I will purchase the necessary specialised equipment needed to safely disentangle a humpback. Going forward, I will have this equipment with me on my boat as I continue my research.”

Teachers went back to school as part of a two-day professional development workshop designed to boost skills.

After 42 years of being free, the Rubis calendar will now cost $5 each.